You are here: Home / All News / Highway bridge monitoring 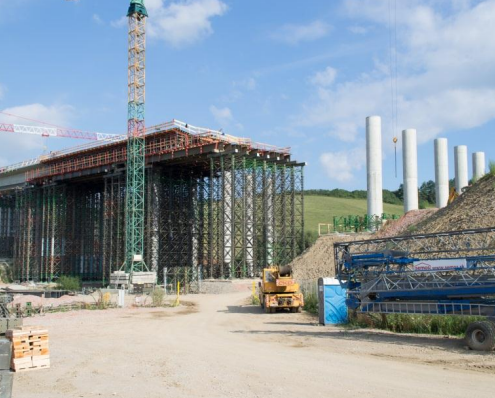 Aim: To control the structural health stability and provide the safety assurance of PIZMO system

Sampling rate: 30 seconds (2x per minute) per each sensor

Number of samples: 1229 per each sensor

Details: The continuous load is created by pumping of around 480m3 concrete on the top of the PIZMO system to build the highway bridge deck. This process takes around 10 hours and provides enough measuring data to evaluate the increase of load on the PIZMO system. There have been selected 6 individual pillars of the PIZMO system and additional horizontal and cross-oriented elements between pillars to be monitored. This, over the entire time of monitoring, has provided enough data for static analysis. The extent of this report doesn’t allow to present all measured data, following information are selected as representative measured and evaluated data. The load has been calculated using Hooke’s law and the known elasticity modulus of the steel. As the tensile stress the relative elongation (compression) has been measured based on the FBG principle.

Advantages of the measuring system:

As shown on the below figure the progress of the load (3 individual vertically mounted sensors) on the pillar has correspondingly risen with the amount of the concrete being pumped on the top of measured system. All three load curves are already temperature compensated based on measured temperature profile, because the task was to measure the response of the PIZMO system based only on the concrete mass load. Measured values of maximum load varied between each measured pillars as the construction itself distributed the load continuously, however all measured values remained in accordance with static calculation.

This site uses cookies. By continuing to browse the site, you are agreeing to our use of cookies.

We may request cookies to be set on your device. We use cookies to let us know when you visit our websites, how you interact with us, to enrich your user experience, and to customize your relationship with our website.

Click on the different category headings to find out more. You can also change some of your preferences. Note that blocking some types of cookies may impact your experience on our websites and the services we are able to offer.

These cookies are strictly necessary to provide you with services available through our website and to use some of its features.

Because these cookies are strictly necessary to deliver the website, you cannot refuse them without impacting how our site functions. You can block or delete them by changing your browser settings and force blocking all cookies on this website.

These cookies collect information that is used either in aggregate form to help us understand how our website is being used or how effective our marketing campaigns are, or to help us customize our website and application for you in order to enhance your experience.

If you do not want that we track your visist to our site you can disable tracking in your browser here:

We also use different external services like Google Webfonts, Google Maps and external Video providers. Since these providers may collect personal data like your IP address we allow you to block them here. Please be aware that this might heavily reduce the functionality and appearance of our site. Changes will take effect once you reload the page.